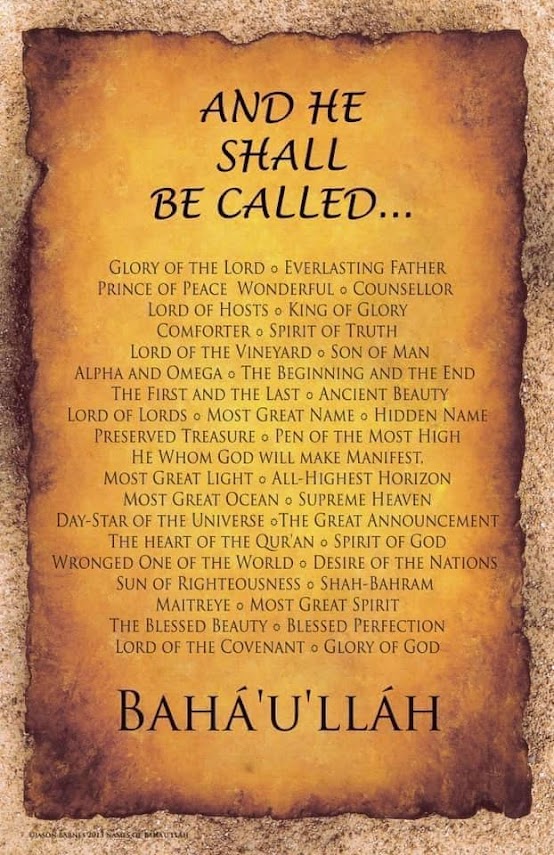 "[...] within every atom are enshrined signs
that bear eloquent testimony
to the revelation of that Most Great Light."

As you may know and fervently seek for :

In the divine Holy Books there are unmistakable prophecies giving the glad tidings of a certain Day in which the Promised One of all the Books would appear, a radiant dispensation be established, the banner of the Most Great Peace and conciliation be hoisted and the oneness of the world of humanity proclaimed.

My dear friends, these exceptional prophecies refer to the person of a Persian nobleman named Baha'u'llah, or in English, the Glory of God, the founder of the Baha'i Faith, speaking here as the spokesman for God on the day of His Declaration.

Arise, and proclaim unto the entire creation the tidings that He Who is the All-Merciful hath directed His steps towards the Ridvan and entered it. Guide, then, the people unto the garden of delight which God hath made the Throne of His Paradise. We have chosen thee to be our most mighty Trumpet, whose blast is to signalize the resurrection of all mankind.

As an introduction to some claims of the Glory of God regarding His station and mission, I offer this statement from a prominent member of his Faith, Adib Taherzadeh.

In this age humanity has strayed far from the path of truth, and the call of BAHA'U'LLAH to recognize Him as the vice-regent of God on earth has fallen on deaf ears. But a careful study of His writings leads us to believe that His Revelation, being the culmination of past Revelations and one which has ushered in the Day of God Himself, will exert such a potent influence upon mankind as a whole that eventually all the peoples of the world will recognize His station of their own free will and embrace His cause of their own volition. And this in turn will bring about, in the distant future, the appearance of a new race of men whose noble character and spiritual virtues we, in this age, are unable to visualize.

It is evident that every age in which a Manifestation of God hath lived is divinely ordained, and may, in a sense, be characterized as God’s appointed Day. This Day, however, is unique, and is to be distinguished from those that have preceded it. The designation "Seal of the Prophets" fully revealeth its high station. The Prophetic Cycle hath, verily, ended. The Eternal Truth is now come. He hath lifted up the Ensign of Power, and is now shedding upon the world the unclouded splendor of His Revelation.

*
O My brother! Sanctify thy heart, illumine thy soul, and sharpen thy sight, that thou mayest perceive the sweet accents of the Birds of Heaven and the melodies of the Doves of Holiness warbling in the Kingdom of eternity, and perchance apprehend the inner meaning of these utterances and their hidden mysteries. For otherwise, wert thou to interpret these words according to their outward meaning, thou couldst never prove the truth of the Cause of Him Who came after Jesus, nor silence the opponents, nor prevail over the contending disbelievers. For the Christian divines use this verse to prove that the Gospel shall never be abrogated and that, even if all the signs recorded in their Books were fulfilled and the Promised One appeared, He would have no recourse but to rule the people according to the ordinances of the Gospel. They contend that if He were to manifest all the signs indicated in the Books, but decree aught besides that which Jesus had decreed, they would neither acknowledge nor follow Him, so clear and self-evident is this matter in their sight.

*
By the righteousness of God! He Who is the Best-Beloved of the worlds-He Who hath ever been the Desire of every perceiving heart, the Object of the adoration of all that are in heaven and on earth, and the Cynosure of the former and the latter generations-is now come !

I swear by the righteousness of God! Verily this is the Primal Point, arrayed in His new attire and manifested in His glorious Name. He at present beholdeth everything from this Horizon. Indeed He is supreme over all things. Amongst the Concourse on High He is known as the Most Great Announcement and in the Realms of Eternity as the Ancient Beauty, and before the Throne by this Name which hath caused the footsteps of them that are endued with understanding to slip.

This is the sealed and mystic Scroll, the repository of God’s irrevocable Decree, bearing the words which the Finger of Holiness hath traced, that lay wrapt within the veil of impenetrable mystery, and hath now been sent down as a token of the grace of Him Who is the Almighty, the Ancient of Days. In it have We decreed the destinies of all the dwellers of the earth and the denizens of heaven, and written down the knowledge of all things from first to last. Nothing whatsoever can escape or frustrate Him, whether created in the past or to be created in the future, could ye but perceive it.

GOD testifieth that there is none other God but Him and that He Who hath come from the heaven of divine revelation is the Hidden Secret, the Impenetrable Mystery, Whose advent hath been foretold in the Book of God and hath been heralded by His Prophets and Messengers. Through Him the mysteries have been unravelled, the veils rent asunder and the signs and evidences disclosed. Lo! He hath now been made manifest. He bringeth to light whatsoever He willeth, and treadeth upon the high places of the earth, invested with transcendent majesty and power.

O people! The Day, promised unto you in all the Scriptures, is now come. Fear ye God, and withhold not yourselves from recognizing the One Who is the Object of your creation. Hasten ye unto Him. Better is this for you than the world and all that is therein. Would that ye could perceive it!